A BRIEF HISTORY OF THE COMPANY.

Shelvoke & Drewry Ltd was formed in October 1922 by Harry Shelvoke (1878 - 1962) and James Drewry (1883 - 1952) who were employed by the Lacre Company that moved to Letchworth Garden City [For details of Letchworth see  www.letchworthgardencity.net/  and www.letchworth.com ] in 1910. Mr. Shelvoke was General Manager, and Mr. Drewry was Chief Engineer. Between them they conceived a lorry with a number of innovative features, and built the prototype in Harry Shelvoke's barn. As the Lacre Company was not interested in this enterprise, they set up Shelvoke & Drewry to manufacture their design, which they named: "The Freighter." But which is affectionately remembered as "The Tiller." Further information on James Drewry can be found on http://www.drewry.net/TreeMill/indiI066.html 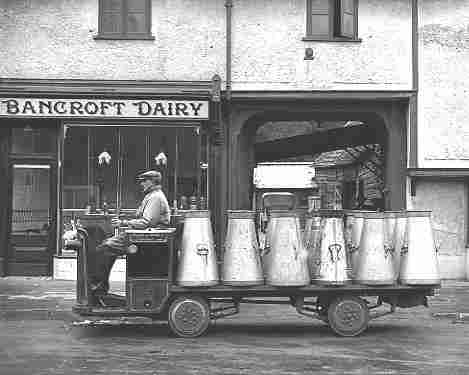 An early version of the SD Freighter. Photo: Vintage Pictures.

The main features of the Freighter were its ease of control at a time when the ability to drive was not widespread. This was achieved by utilising an epicyclic gearbox, with three forward speeds and three in reverse, which eliminated the need for a clutch pedal and a hand brake. The gears were controlled by a simple lever, known as a "tiller", which controlled both gears and clutch. A second tiller was used for steering; there was no conventional steering wheel. An exceptionally low loading height of 23ins. was achieved by using 20 inch dia. solid tyres, which also avoided punctures. The Freighter had a turning circle of 21ft 8ins, automatic lubrication of all moving parts, and power hydraulic tipping. It was powered by a 4 cylinder Petrol engine RAC rating 13.2 hp. which was placed sideways in the chassis.

The Freighter was an immediate success. At first it was seen as a general purpose lorry, and was sold under the slogan "Two tons carried at the cost of One." The company started with 30 employees and Shelvoke and Drewry were Joint Managing Directors, along with T.K.Sibbald and C.T.Barlow.

Early customers included the L.M.S. Railway, Carter Paterson, Express Dairy and J. Lyons. But the municipal potential was soon realised and by the end of 1924, when the hundredth vehicle had been built, there were 35 freighters in municipal service. The first order being from Deptford in September 1923.

Sales came through demonstration and recommendation, civic pride was appealed to. By October 1932 the 1,000th freighter had been made, and S&D's were in use with 300 municipalities. The vehicles were sturdy and well built. A survey in 1945 revealed that a total of 286 vehicles were in service over 14 years old. Of these 6 dated from 1923, 26 were over 20 years old and 74 more than 18 years old.

An apprenticeship scheme was started in 1923, and throughout its history S&D remained committed to training the future generation of engineers.

From 1928 customers were offered the option of pneumatic tyres, and the next year the first fully enclosed cab was supplied. In 1931 the first vehicle body with a moveable floor for compacting rubbish was built. In 1935, following a disagreement with Harry Shelvoke, James Drewry left to join Hands Trailers. His replacement as Chief Engineer was C.K. 'Tiny' Edwards, who served the Company until his retirement in 1955. His first design was the New Type of 1937, where the engine was placed in front of the driver, but retained tiller controls. By 1939 some vehicles were being given a steering wheel, especially those employed as buses. Some 50 Freighter chassis were used as Public Service Vehicles, with Worthing's Tramocar fleet being the largest.

Between 1932 and 1937 the Company produced tractor units for the Latil Company, producing between 150 and 175 during that period.

With the coming of the Second World War in 1939 Freighter production ceased almost completely, as the factory turned to war production.

Towards the end of World War Shelvoke & Drewry were commissioned to build 37 ft submersible craft for clandestine operations, despite having no previous experience of ship building.

After over twenty years research Tom Colville has put the results of his search onto the Internet.

Tom's late father Capt. Archibald Colville MOIsp KOSB was involved in sea trials of the Welfreighter based in Australia in 1945. The Welfreighter was a miniature submarine built at S&D's Icknield Way works from 1944 onwards. For many years the history of these vessels was covered by the Official Secrets Act, and Tom's father destroyed any papers he had about his war time experiences prior to his death.The story told on the website makes fascinating reading, and I thoroughly recommend it to anyone with an interest in this phase of the history of S&D. It can be found at www.welfreighter.info

The advances of the War years left Shelvoke & Drewry's Freighter looking very old-fashioned, and although numbers were produced until 1952, C.K. Edwards immediately started on a more modern design. The 'W' Type was tested and demonstrated in the severe winter of 1946/47, and immediately found favour with the municipal councils.

In 1949 Morris Davenport was appointed Managing Director, and Harry Shelvoke became Chairman and served until 1957. Also Len Gostling, the Works Manager, was appointed as a director at this time.

An updated version of the pre-war Fore & Aft Tipper was designed and proved very popular with customers. The density of refuse was decreasing and this body produced a degree of compaction. By 1961 2,500 F & A Tippers had been produced. In 1957 a pressure plate, known as Powerpress, was offered giving additional hydraulic compression of the refuse when the body was in the forward tipping position.

The trucks could lift between 12,000 and 18,000 lbs. at 24 inch centres with a lift height of up to 29 feet. Models produced were the Model 82 with 7 ft. 10 ins. wheelbase, whilst the long wheelbase Model 100 had an 8 ft 4 ins. wheelbase. The smaller Model 72 was designed for use indoors. Customers included the railways and all three branches of the Armed Forces. In 1962 the entire range of forklift trucks was re-designed and re-named Defiant. An extensive range of models with lifting capacity from 4,000 lbs. upwards was offered. Production of Forklift trucks ended in 1974 with the largest of the Defiant range offering lifts up to 27 tonnes.

By 1959 the new regulations permitted a gross weight of 14 tons, but the gross weight capacity of the 'W' Type was 8 tons 11 cwt. Clearly there was a need for a replacement vehicle. Following an abandoned design under John Huggins' leadership, Tom Tillson, from rival suppliers Dennis, was appointed Chief Engineer.The 'T' Type was designed in August of 1959, and the prototype was on test by the autumn.

100 sets of parts were produced even before the prototype was fully tested, such was the perceived urgency. The 'W' Type was also updated with a fibreglass cab front giving a more modern appearance. The 'T' type was available with an aluminium alloy body with continuous hydraulic compression of the refuse and was made under licence from the French Semat-Rey design and known as the Pakamatic. 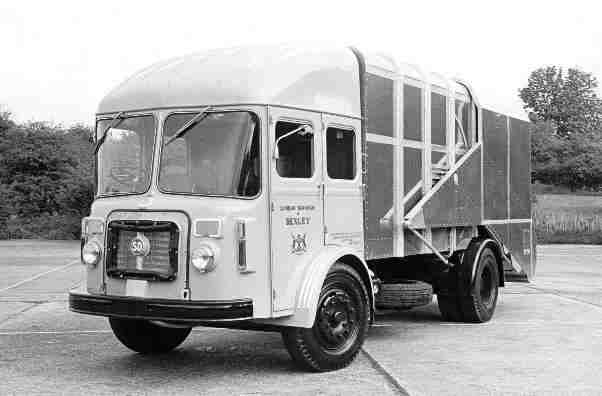 A further factory was built in Blackhorse Lane, Letchworth, for the building of these new models. It was built in 11 months and opened on 1st November 1961. In 1969 the Paka Ejector model was introduced to overcome the problems of tipping on rough dumps, which could make the vehicle unstable or cause the body to distort.

In 1971 the Revopak was introduced with continuously rotating tines, which were able to break up discarded old cookers or fridges with ease. The introduction of these models allowed the Company to increase its market share from 33% to 66%.

In 1966 Shelvoke & Drewry merged with tanker manufacturers, W.P.Butterfield, and in 1971 a further merger took place to create the Butterfield-Harvey Group, both mergers being made to provide additional finance. When Nick Baldwin and Arthur Negus wrote Kaleidoscope of Shelvoke & Drewry in 1979/80, [to which work I am greatly indebted for much of the information in this brief history] the company was clearly optimistic about the future. In 1983 the American Dempster Company [Krug International] purchased the Company.

The full reasons for the decision to cease trading are not clear. But they include a number of factors, including the way local government in Britain was re-organised. Also despite the popularity of the Revopak, it was an expensive vehicle to operate with its continuous compaction. Meanwhile in 1979, Dennis Bros. introduced their Phoenix model after almost completely losing its market share. Dennis owned the Eagle Engineering Company through a series of buyouts, and the Hestair Eagle compaction mechanism, which was based on the Swiss Ochsner system, was immediately popular with operators. This led to Dennis regaining a market share of 60%, where just six years before S & D had held 65%. By 1986 the Company was known as Shelvoke Dempster, and its range of products included bulk loaders of American design. However following a further change of ownership, the company had ceased to trade before the end of the 1991.

The length of service of employees of the Company is remarkable. When, in 1949, Harry Shelvoke decided to stand aside and become Chairman of the company, he turned to his accountant, Morris Davenport, who served as Managing Director for twenty years, until his own retirement. In 1969 he was succeeded by Stanley Quin, who had been an apprentice with the Company, and remained as Managing Director until 1979. He was succeeded by Fredrick Hooson. Tom Tillson also served for twenty years as Chief Engineer, retiring in 1979. Service of over 40 years was not uncommon among the workforce and management.

The People who were S&D.

In March 2003 the SD Enthusiasts' Club was formed. Since then many former employees have kindly written of their experience of Shelvoke & Drewry. Their stories appear in the quarterly Newsletter, and you will find a selection by going to the Newsletter section using the link below. Virtually without exception ex-employees remember the company as unique and a "great place to work." The stories they tell are a reminder of the wide range of skills utilised by the Company.

KEY DATES AT A GLANCE.

Letchworth Garden City  is the first British Garden City, and the place where Shelvoke & Drewry was founded in 1922, is of considerable interest as an example of pioneering development of planned communities. Three Websites give information about the First Garden City:-

This site gives a history of the Garden City, books for sale, and links to other sites.

Letchworth Recollections records people's memories of living in the First Garden City and can be found on:- http://www.hertsmemories.org.uk/content/category/herts-history/towns-and-villages/letchworth_garden_city

SOME OF THE PEOPLE WHO WERE PART OF S&D ARE RECALLED ON WEBSITES:-

This is a website dedicated to the family history of the Shelvoke name. The Picture Gallery includes a photograph of the Tramocar at the Amberley Bus Museum, and a selection of trivia about S & D.

Tony Drewry, whose grandfather was James Drewry's brother, has some interesting material on : http://www.drewry.net/TreeMill/indiI066.html

ACCOUNTS OF OPERATING S&D VEHICLES CAN BE FOUND ON:-